The computer club's cyber security team won third place at the 2018 UAB Blazer42 Capture the Flag Competition in cyber security, and will split $4,000 in scholarships. Center Point High School students Nicole White, Kori Harris, Trinity Bell, and Kasia Phillips put their cyber security skills to the test solving challenges in areas such as code-breaking and decoding, network traffic analysis, file analysis, and website security, competing against high school teams from across the state in a grueling four hour challenge. Nicole White, the only Senior team member, will be attending UAB's digital forensics program in the fall.

The competition was hosted by UAB’s digital forensics program and sponsored by UAB’s CTF student organization and Palo Alto Networks, whose chief security officer was on hand to meet with students and teachers.

Palo Alto Networks is a global leader in cyber security, partnered with companies such as Amazon and Microsoft, was named as one of top 50 companies changing the world by Fortune magazine in 2017 and had $1.8 billion in revenue in 2017.

According to Forbes, the projected shortfall of cyber security jobs will be 1.5 million by 2019. 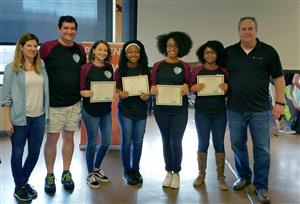