Once again Center Point’s Cyber Security Team captured 1st place in Alabama, this time among 276 teams who qualified for the 2020 Girls Go CyberStart National Championship.  Although over 450 Alabama girls signed up for GGCS, only 52% made it to the competition round. Alabama had 11 teams qualify for Nationals, and Center Point's team finished 17th out of the 276 teams.

Building on their success from last year, seniors Shayla Terry and Kylah Williams led the way for new team members Natasha Burnett and Jasmyn Suttles. Even a pandemic could not blunt their determination as they spent two exhausting days May 20th and 21st testing their Cyber Security skills. During their long, 12 hour days they worked in Linux and Windows and conquered digital forensics, networking and cryptography, performed binary exploitation and slipped past web site defenses. 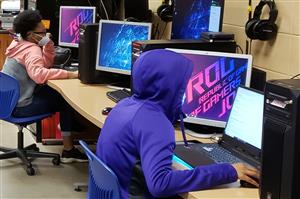