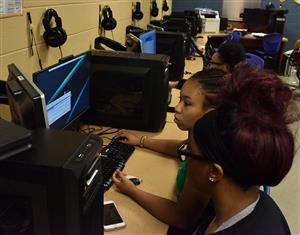 The hard work and perseverance of team members Kori Harris, Mia Speights, Shayla Terry and Kylah Williams was noticeably evident as they spent nearly 30 hours from June 5th to June 7th demonstrating their skills in areas such as cryptography, digital forensics, web vulnerabilities, networking, Python and Linux. The team gave up part of their summer to prepare for and participate in this gruelling three day competition.

Team members have earned a combined 18 IT certifications including CompTIA's IT Fundamentals and A+, and TestOut PC Pro, Network Pro, Switching Pro, Routing Pro, Security Pro and Linux Pro.

In March and April, over 10,000 girls nationwide participated in the Girls Go CyberSecurity Assessment. 6,600 were invited to the second round CyberStart game, and only 480 of those were selected for the National Championship. This is the first year Alabama has joined in the Girls Go CyberStart initiative, a national cybersecurity program designed specifically for high school girls to encourage more females into the industry and reduce the digital skills gap.