Alabama SkillsUSA State Championships, April 15-17, 2019 at the Birmingham BJCC. Center Point High School's IT program was represented by an all-girls team who excelled once again. For the fifth year in a row they received a gold medal in Internetworking, this year won by Kori Harris, followed by Shayla Terry with a silver medal. Kori currently has six industry certifications in IT and will be receiving two more this semester. Shayla currently has four and will receive two more.

Kori Harris makes cables as part of the Internetworking competition at the 2019 SkillsUSA Alabama state championships. 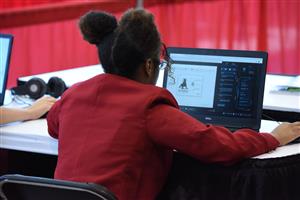 Kori and Trinity each received a $2000 scholarship in addition to their medal. They will travel to Louisville, Kentucky June 24-28 to represent Center Point High School and the state of Alabama in the SkillsUSA National Leadership and Skills Conference, the largest of its kind in the nation with more than 18,000 students, teachers, and business partners participating.

Trinity Bell performs forensic analysis on a computer in the Cyber Security competition at the 2019 SkillsUSA Alabama state championships.