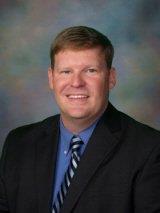 It is my 24th year in education and I have enjoyed every minute of it!  I have a loving and supportive wife, Kaci, and three amazing children, Codi, Sarah, & Zane.